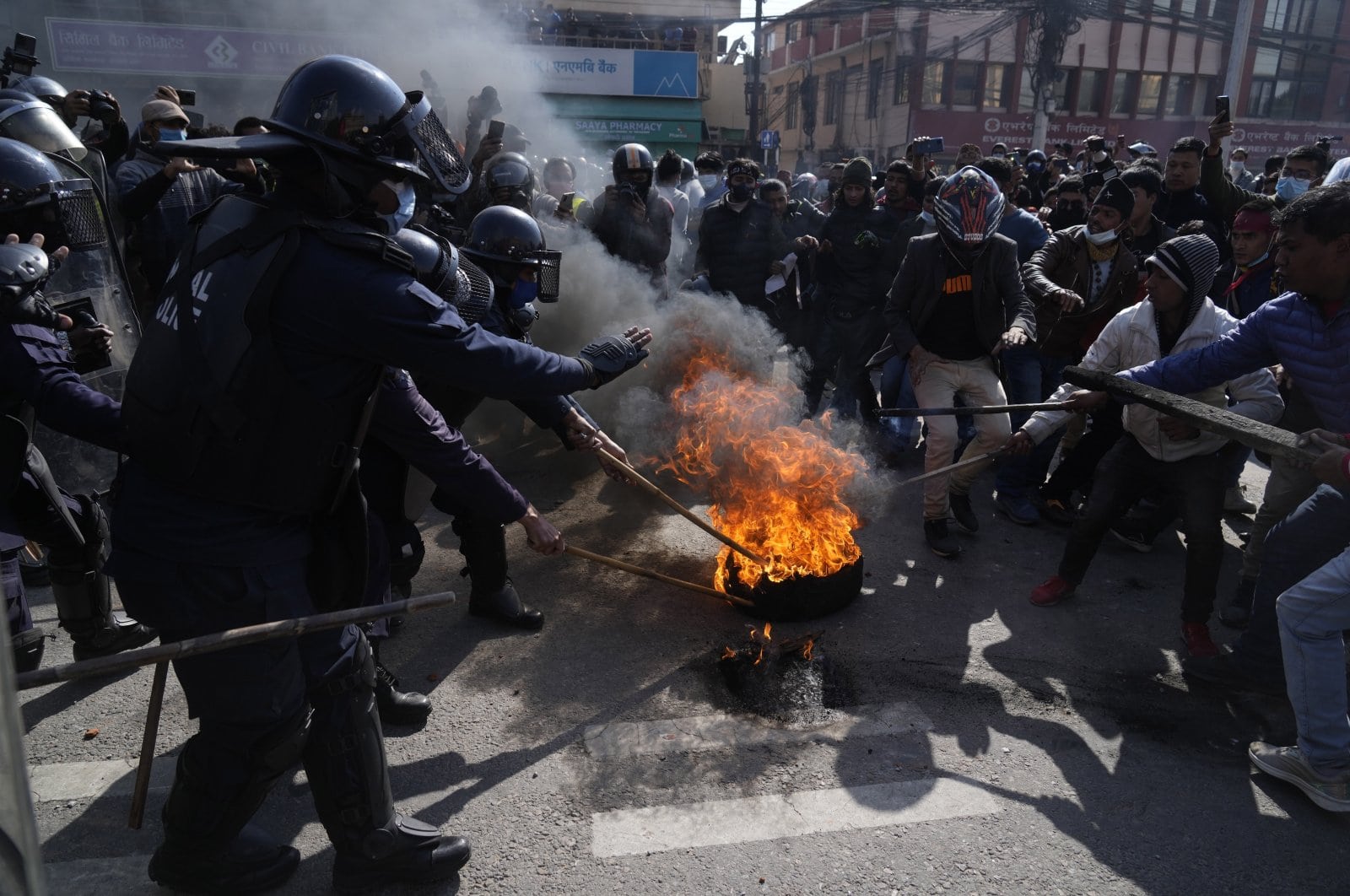 ▪ Authoritarianism continues to rise as political leaders across Africa seek to subvert the democratic process.
▪ The Americas are struggling against the further threat of civil unrest and the growing polarisation of the nation.
▪ Following the US withdrawal in Afghanistan the country has struggled under Taliban rule.
▪ China continues to cause international concern over the militarization of the South China Sea, further restrictions over Hong Kong, threats towards Taiwan and Japan, as well as economic punishment towards Australia.
▪ In Haiti a surge in abductions for ransom is rapidly emerging in the face of political instability, the spread of violent gangs, shortages of food and fuel, and humanitarian needs across the earthquake-hit south.

The world has entered a new phase that is both volatile and unstable and, as a result of this, we are facing the prospect of permanent changes in society with the likelihood of economic instability ahead. We’re now witnessing an increase in political instability, civil unrest, and conflict across the globe.

According to The Institute for Economics and Peace, crisis-related tensions between countries are always likely to increase during economic downturns. A reduction in overseas aid budgets will impact those fragile nations dependent upon international aid. Some may not be able to borrow enough funds to sustain economic recovery, potentially resulting in destabilisation and increased vulnerability.

As many global organisations are having to operate in what’s now an unpredictable environment, and Governments struggle to find a balance between the difficult choice of preserving public health and maintaining economic stability, private individuals and company directors are embracing the significance of intelligence-led security services to help manage risk and provide confidence to employees, business travellers, customers, and suppliers.

Our Priavo Security team are assisting clients globally,  ranging from monitoring and response for remote workforces through to the provision of robust journey management and protection services.

“We have many years’ experience of operating within challenging environments. Our philosophy is that you can operate anywhere in the world if you understand and manage the risk appropriately. Having professional risk mitigation support allows the host organisation to fine tune its risk profile. Key intelligence, robust planning and local support will keep business travellers safe and help to avoid any potentially lengthy interruptions to the business cycle.”

From public health and climate change to peace and security, Africa is facing a number of crises that will potentially divert resources from economic development efforts. Continued armed conflicts in the Horn of Africa, Mozambique, the Great Lakes, and the Sahel continue to destabilize various sub-regions and exacerbate humanitarian crises. Increasingly, authoritarianism continues to rise as political leaders seek to subvert the democratic process and tighten their grip on power. Since early 2020 there have been successful military coups in Mali (twice), Chad, Guinea, Burkina Faso, and Sudan, and attempted coups in Madagascar, CAR, Niger, Guinea Bissau, and possibly in Djibouti.

1. February 2022: Attempted Military Coup in Guinea-Bissau
President Umaro Sissoco Embaló declared he had faced down not just a coup, but “an attempt to kill the president, the prime minister and all the cabinet”. At least 11 people died in the firefight.

2. January 2022: Military Coup in Burkina Faso
Burkina Faso’s military announced the removal of the president, Roch Marc Kaboré, from office, suspension of the constitution and dissolution of the government and parliament, confirming a coup in a statement on the state broadcaster.

5. May 2021: Military Coup in Mali
Colonel Assimi Goita, led his men to plot a second coup in nine months in Mali. The coup leaders deposed the transitioning President, Bah Ndaw and Prime Minister Moctar Ouane, over cabinet appointments that did not please the army.

Whilst the world battles a pandemic and the consequent economic instability, the Americas find themselves struggling against the further threat of civil unrest and the growing polarisation of the nation. Latin American countries, in particular, face a mix of social and economic issues alongside demands for more spending. The fallout from the pandemic has worsened basic inequalities and acted as a catalyst for further unrest. In Brazil, growing political polarisation is heightening the risk of protests from both sides of the political divide. In the USA disquiet over socioeconomic inequality and against racial discrimination, stemming from the George Floyd incident, has seen a hugely turbulent period. In Canada, unrest resulting from vaccination status and COVID-19 measures continue to disrupt a return to normalcy.

1. February 2022 (ongoing): COVID-19 related protests across US and Canada
Protests against public health measures, including lockdowns, mask mandates, and vaccine requirements have been increasingly common, especially prevalent in Western democracies such as the United States.

2. June 2021: Police Reform protests in Columbia
Protests occurred for more than a month over measures aimed at reforming the country’s national police, including the creation of a human rights directorate within the department and the introduction of body cameras for all street-level officers.

3. June 2021: Indigenous Land Rights protests in Brazil
President Jair Bolsonaro’s administration’s support for loosening restrictions on land use and the announcement of a verdict in a crucial Indigenous land rights case sparked anger over the economic exploitation of Indigenous lands.

4. November 2020: Capital Hill Riots in US
Allegations levelled by President Donald Trump and his allies that vote counts were inaccurate and that there had been significant electoral fraud brought about large scale protests and the Capital Hill riots.

5. June 2020: George Floyd Riots in Minnesota (Worldwide)
Death of George Floyd in the United States, sparked protests against local police brutality and racism across the globe.

While the Taliban’s swift advance following the US withdrawal in Kabul left much of the West reeling, Afghans themselves are bearing the brunt of the militant group’s rule. Vast numbers of refugees have been displaced or fled Afghanistan, leaving the previous Afghan government and its core institutions in disarray. Financially, the disruption to revenue and aid means that the Finance Ministry is struggling to meet basic expenses and core social services are consequently in danger, even before potential Taliban restrictions. In terms of humanitarian developments, women’s rights advances and media freedom have been completely removed. Journalists have been beaten and detained, with many media outlets being closed or drastically scaled back. Across the country, the Taliban have searched for, threatened, and sometimes executed former members of the Afghan National Security Forces (ANSF), officials of the former government, or their family members.

2. September 2021: Women’s Rights Protests
Afghan women carried out demonstrations in several cities to protest against Taliban policies violating women’s rights. In Herat, Taliban fighters lashed protesters and fired weapons indiscriminately to disperse the crowd, killing two men and wounding at least eight more. The Taliban subsequently banned protests that did not have prior approval from the Justice Ministry in Kabul.

3. September 2021: Media Censorship
Taliban authorities imposed wide-ranging restrictions on media and free speech that included prohibitions on “insulting national figures” and reports that could have a “negative impact on the public’s attitude.” Two journalists from the Etilaat-e Roz media outlet were detained and severely beaten before being released.

2. April 2021: Human Rights Violations in Xinjiang
Reports by Human Rights Watch found authorities were committing crimes against humanity as part of a widespread and systematic attack on Uyghurs and other Turkic Muslims in Xinjiang, including mass detention, torture, and cultural persecution.

3. January 2021: Internet Censorship
Police censored the internet through website blocking for the first time. In January 2021, the police ordered internet service providers to block access to HKChronicles.com, a website that documents police abuse but had also revealed personal information about police officers. Other websites have continued to be censored since.

4. June 2020: National Security Law Imposed
Over 150 people have been arrested for violating the draconian National Security Law (NSL) since it was imposed. Some NSL suspects held in custody were mistreated; pro-democracy activist Tam Tak-chi has been held in solitary confinement since he was detained in September 2020.

Haiti is facing a multitude of crises: political instability, a collapse of the rule of law, the spread of violent gangs, shortages of food and fuel, and humanitarian needs across the earthquake-hit south. Most significantly, however, a surge in abductions for ransom is rapidly emerging. With victims spanning all social classes and ransoms ranging from as little as $100 to six figures, Haiti has the highest per capita kidnapping rate on Earth.  Numbers have climbed steadily in recent years as violent gangs, unchecked by the government, have seized control over key portions of the country. The increase is thought to be linked to growing desperation, an increasingly compromised police force and a general rise in gang activity amid a political vacuum. Haitian gangs are believed to be linked to influential politicians and business executives; some analysts suggest the kidnapping blitz could reflect upended deals and shifting alliances in the aftermath of President Jovenel Moïse assassination.

2. September 2021: Religious Kidnapping
A preacher was killed and his wife kidnapped in front of a church in Port-au-Prince. Shortly after, Kidnappers wearing Haitian National Police uniforms snatched a pastor and two worshipers from a church in the troubled Delmas 29 neighbourhood

3. July 2021: Transport Kidnap
In July, a busload of 16 people was kidnapped in the northern city of Gros-Morne. Similarly, in May, armed men boarded a bus in Port-au-Prince and abducted more than a dozen passengers.

4. April 2021: Religious Kidnapping
Four people, including a pastor and a well-known pianist, were kidnapped during the middle of a service at the Seventh-day Adventist Gospel Kreyòl Ministry Church in Diquini, in the outskirts of metropolitan Port-au-Prince.

Priavo Security is assisting its clients around the world with the able support of its global partner network. Ranging from monitoring and response for remote workforces through to the provision of robust journey management and protection services, our business offers high levels of assurance.