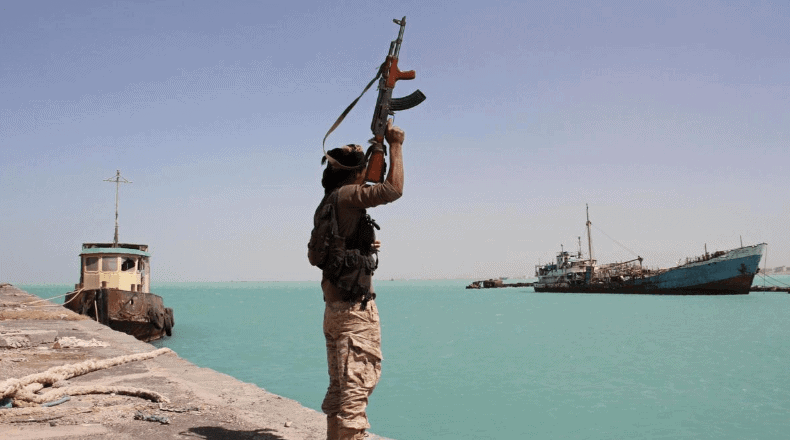 Since 2017, Houthi forces in Yemen have been perfecting their use of maritime weapons, including missiles, drones and unmanned surface vehicles or water-borne improvised explosive devices — to carry out attacks against maritime vessels and port facilities in the region. While only one of these attacks to date has led to the loss of lives, others have caused material damage to a number of ships and led to the temporary shutdown of one of Saudi Arabia’s busiest ports.

Open source research reveals 24 successful or attempted Houthi maritime WBIED attacks carried out between January 2017 and June 2021. The majority of all Houthi attacks were directed at commercial shipping vessels such as tankers or freight carriers. Four targeted civilian ports and two targeted oil production and distribution facilities. The targeted commercial shipping vessels were sailing under different flags, including Yemen’s and Singapore’s, but a majority have been Saudi carriers.

In addition to these maritime drone attacks, the Houthis have also carried out aerial drone bombings, rocket-propelled grenade strikes from fast moving boats, and indiscriminate naval mining in the strait connecting the Red Sea with the Bay of Aden

What are the Threats?
The greatest threat to merchant shipping comes from misidentification or collateral damage incurred during a Houthi attack. Although not intentionally targeted, International vessels can be mistaken for Emirati, Saudi and American vessels. In the event of an attack, the Houthis possess an array of naval weapons, mainly supplied by Iran. The following are some examples of Houthi maritime capability:

Missiles
The Houthis are known to possess anti-ship cruise missiles. The Iranian Noor C802 anti-ship missile and the Russian-manufactured 9M133-1 KORNET are capable of being modified and launched from a smaller vessel at sea, and have been discovered in Houthi possession. Houthi forces began using anti-ship missiles to carry out attacks against the Emirati, Saudi and American vessels, with varying degrees of success. However, following US missile strikes that eliminated the Houthis permanent radar sites on the Red Sea coast the Houthis use less accurate targeting methods such as small boats working as spotters.

Water-borne Improvised Explosive Devices (WBIED)
There are two known WBIED configurations used by the Houthis. The first is a 10-meter coast guard patrol boat manufactured in the UAE. The second known model of Houthi WBIED has been designated by the Saudi-led coalition known as the ‘Blowfish’. This model of WBIED was reported to be more commonly employed by Houthi forces, particularly against coalition-controlled ports on the Red Sea coast and ports in southwest Saudi Arabia.

Sea Mines
Sea mines pose a threat to commercial ships transiting the Southern Red Sea that visit Yemen’s ports. The majority of the naval mines recovered in Yemen have been described as basic (to be contact or magnetic), though sophisticated acoustic naval mines were recently recovered by the Yemeni Navy and Royal Saudi Navy. It was likely that the contact, magnetic, acoustic and pressured mines were Iranian produced.

How can ships mitigate against the risks?
To avoid misidentification it is recommended that all ships remain visible on AIS and register their High Risk Area (HRA) transit with UKMTO and MSCHOA. Warnings to avoid transiting the Southern Red Sea close to SLC warships or merchant vessels are aligned to the SLC. The guidance given to ships transiting the Bab el Mandeb (BeM) strait, recommend vessels use the western TSS to transit the BeM staying west of the Hanish Islands.

Conclusion
The Houthi maritime threat is rising, as shown by the group’s 24 attacks over the past four years. But commercial vessels are not defenceless. Better situational awareness, better measures to avoid approaching maritime threats, and better tools to mitigate them can all play a key role in keeping the Red Sea safe.

Maritime security experts should be alert to the risk that technologies currently deployed by the Houthis will spread to other seas. It will be important to develop effective countermeasures before these methods potentially appear in the Strait of Hormuz as well.

The international community are working closely with the UN and other agencies to rebuild the capacity of the Yemen Coast Guard and Port Authorities to support International shipping. Critically, building and maintaining commercial shipping confidence remains key to feeding and fuelling Yemen.