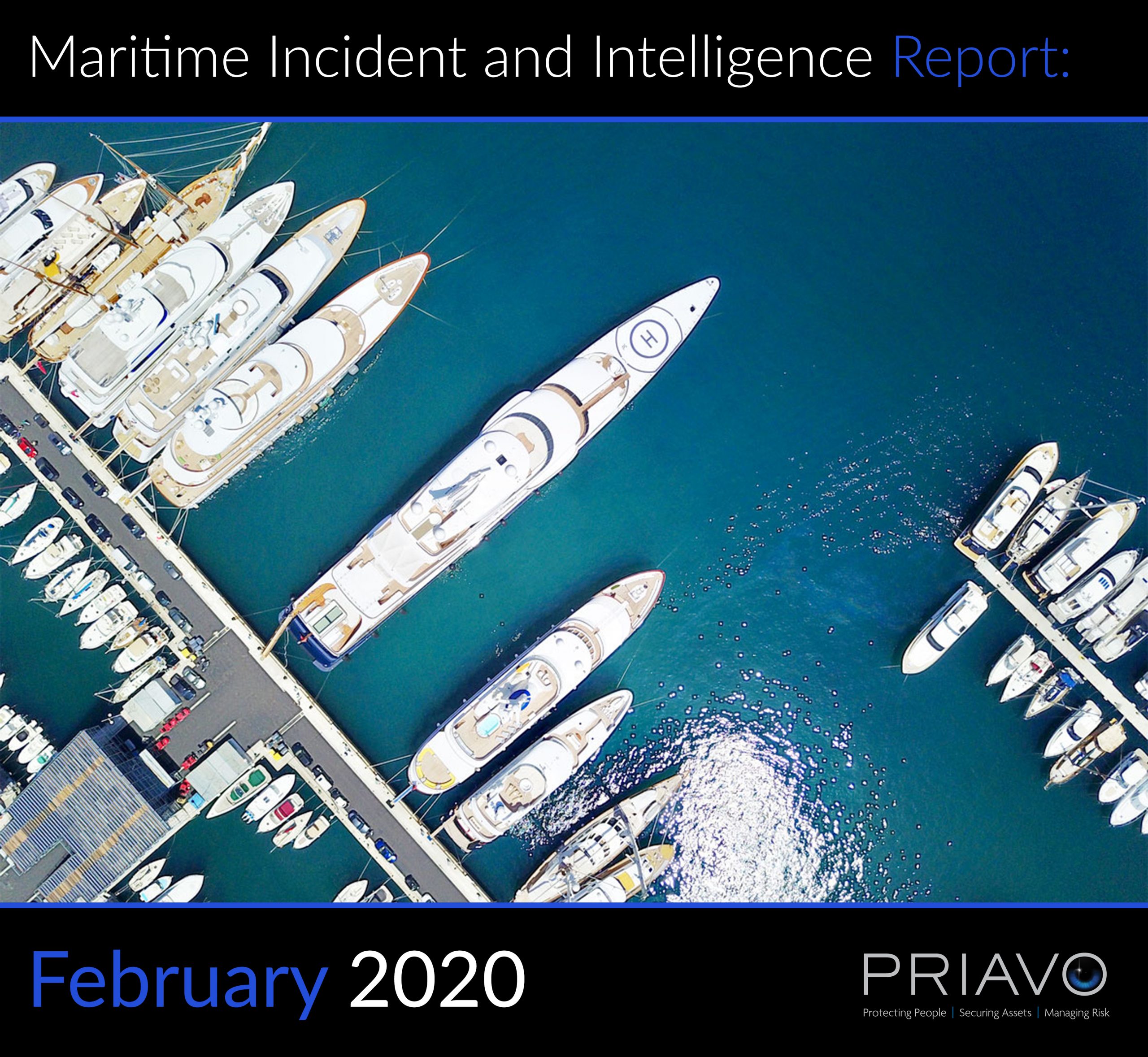 In terms of Piracy, the Indian Ocean region has been inactive during this reporting period however three suspicious approaches with a large number of skiffs have been reported.

It is highly likely that piracy activity will continue to be sporadic and infrequent. It remains the case that lower risk opportunities in other criminal enterprises such as the smuggling of people, narcotics, weapons and charcoal have likely reduced the appetite and desire for local actors to conduct piracy. However, the piracy attack of 21st April 2019, coupled with a suspicious event on 3rd September, is a stark reminder that the threat from piracy is only suppressed, not eliminated.

1. SUSPICIOUS APPROACH
Date & Time: 22/02/2020
Location: Gulf of Aden
Details: The ETG 175 of the Chinese navy escorting the MV Excellent and the MV AURORA SPIRITS detected 7 suspicious skiffs approaching the convoy. A flare was fired to disperse them, and the skiffs fled.

3. SUSPICIOUS APPROACH
Date & Time: 25/02/2020 10:42 UTC Location: Gulf of Aden
Details: A chemical tanker, the “Wawasan Emerald” flying the Panamanian flag is reported to have been attacked by 7 skiffs at the exit of the Strait of Bab El Mandeb. The day before they noticed that skiffs were approaching one aft, the other on the port side. The shift manager immediately alerted the guards, the captain and the safety team leader and an additional watch was put in place. The skiffs approached the ship at a speed of 15 kts and the captain ordered to increase the speed to the maximum and to gather the crew in the citadel. The 7 skiffs approached around the ship at a minimum distance of 0.62 Nm. The ship then activated its audible signals and the guards brandished their weapons in the direction of the skiffs, but they continued to sail parallel to the ship for another 17 minutes. A Japanese military aircraft joined the ship’s position, and, at 1357 LT, the skiffs then reduced their speed and stopped approaching.

This reporting period has largely remained the same in terms of maritime crime and piracy compared to the previous month. There has been one report of the kidnapping of nine crew and one vessel was fired upon by pirates armed with automatic weapons.

1. BOARDED
Date & Time: 01/02/2020 01:30 UTC
Location: Lagos Anchorage, Nigeria.
Details: Two robbers in a boat boarded an anchored tanker. They tried to seize the duty AB on routine rounds, who managed to escape. Alarm raised. Hearing the alerted crew, the robbers escaped without stealing anything. Incident reported to Nigerian Navy. A patrol boat was dispatched to the location.

2. BOARDED
Date & Time: 14/02/2020 07:59 UTC
Location: 102nm NW of Sao Tome Island
Details: Armed pirates in two boats approached and boarded a container ship underway. Master raised the alarm, sent distress message, stopped the ship and all crew members mustered in the citadel. Upon receiving the distress message, the IMB Piracy Reporting Centre (IMB PRC) immediately alerted the Authorities in the Region and commenced liaising with the authorities and vessel operators. A security vessel with a Nigerian Navy team was dispatched to assist. The Sao Tome Navy/Authorities requested a nearby Portuguese patrol boat to assist as well. The crew emerged from the citadel after the Nigerian navy personnel boarded and searched the ship. Some ships equipment was reported as damaged. Under the escort of the security vessel the ship proceeded to a safe port.

4. ATTEMPTED BOARDING
Date & Time: 19/02/2020 00:20 UTC
Location: Lagos Anchorage, Nigeria
Details: Three persons in a small boat approached an anchored tanker and attempted to board via the anchor chain. Duty crew on routine rounds noticed the attempted boarding and raised the alarm. Seeing the alerted crew, the persons aborted the boarding and escaped in their boat. The incident reported to Port Control.

6. FIRED UPON
Date & Time: 25/02/2020 02:20 UTC
Location: 130nm SW of Brass, Nigeria
Details: Duty office onboard a container ship underway noticed a speed boat approaching at high speed. Alarm raised, speed increased, all non-essential crew mustered in the citadel and CSO notified. As the boat closed the Master commenced evasive manoeuvres. The approaching boat called the ship over VHF Ch 16 and demanded the ship to be stopped. Shots were heard being fired towards the ship. After around one hour the boat aborted and moved away. All crew safe.

This reporting period has largely remained the same as last month, with three incidents of maritime crime reported. These incidents generally use the same modus operandi whereby persons armed with knives or more rarely guns, board a vessel, either underway or at anchor, confront and subdue the crew and then steal ship stores or engine spares before making their escape.

1. BOARDED
Date & Time: 02/02/2020 21:20 UTC
Location: 0.4nm SW of PT Dharma Sentosa Marindo Yard, Pulau Batam, Indonesia
Details: Alert crew onboard a tug moored to a buoy noticed three robbers on deck and raised the alarm. The crew confronted the robbers who were able to escape with the assistance of two of their accomplices waiting in their boat. Incident reported to the police who boarded the tug for investigations. A search was carried out. It was noticed the
padlock to the storeroom was damaged and ship’s equipment stolen. All crew safe.

This reporting period has seen one incident of robbery whilst at anchor.

1. BOARDED
Date & Time: 25/02/2020 07:07 UTC
Location: Port Au Prince Anchorage, Haiti
Details: Two robbers armed with a gun boarded an anchored tanker. Alert duty crew noticed the robbers, raised the alarm and retreated into the accommodation. All crew mustered. Seeing the alerted crew, the robbers escaped with ship’s properties in a wooden boat along with another accomplice. The incident was reported to the CSO and Port Control.