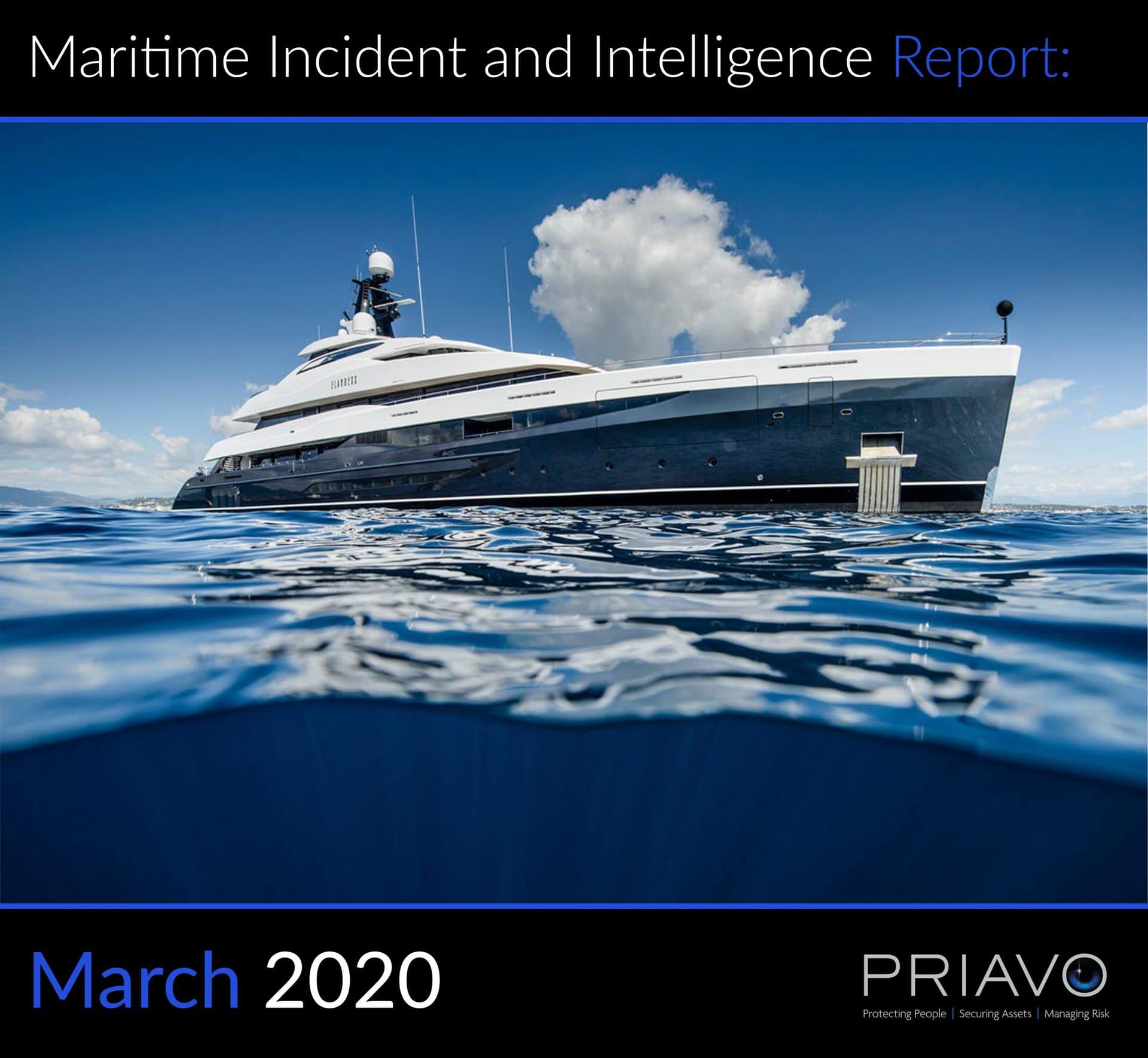 COVID-19: Information on the current restrictions due to Global Pandemic

This advice came into effect on 17th March for a period of 30 days (expected be lifted 17th April).

In terms of Piracy, the Indian Ocean region has been inactive during this reporting period however three suspicious approaches with a large number of skiffs have been reported. It is highly likely that piracy activity will continue to be sporadic and infrequent.

It remains the case that lower risk opportunities in other criminal enterprises such as the smuggling of people, narcotics, weapons and charcoal have likely reduced the appetite and desire for local actors to conduct piracy. However, the piracy attack of 21st April 2019, coupled with a suspicious event on 3rd September, is a stark reminder that the threat from piracy is only suppressed, not eliminated.

1. SUSPICIOUS APPROACH
Date & Time: 01/03/2020
Location: Gulf of Oman
Details: A merchant vessel has reported a suspicious approach in The Gulf of Oman. 2 skiffs approached and circled the vessel. A Coalition Warship was in the vicinity and on its approach the 2 skiffs departed. Vessel and crew are safe.

2. SUSPICIOUS APPROACH
Date & Time: 03/03/2020 10:20 UTC
Location: Gulf of Aden
Details: A Merchant Vessel was reportedly closed by 3 small craft. 1 of these craft was unmanned and approached the vessel to extreme close quarters. This approach caused no damage, nor were any crew members injured. The Merchant Vessel and crew are safe. The early indications are that the unmanned craft was probably remote controlled. The details of the incident remains under investigation.

This reporting period has largely remained the same in terms of maritime crime and piracy compared to the previous month. There has been two reports of kidnapping, with one vessel’s crew released shortly afterwards and one vessel was fired upon by pirates armed with automatic weapons.

2. ATTEMPTED BOARDING
Date & Time: 05/03/2020 07:30 UTC Location: 49nm SE of Lome, Togo
Details: Master onboard a product tanker underway noticed a skiff on a parallel course. On altering her course, the skiff was seen altering course also and approaching the tanker. Alarm raised and the non-essential crew members mustered in the citadel. As the skiff closed in, ten persons were noticed in the skiff. A weapon was observed in the skiff as well. The Master increased speed and commenced evasive manoeuvres, resulting in the skiff aborting the approach. Vessel and crew safe.

3. BOARDED
Date & Time: 07/03/2020 01:50 UTC
Location: Abidjan Anchorage, Ivory Coast
Details: A robber in a canoe approached and boarded an anchored offshore tug. The alert crew noticed the presence of the robber and raised the alarm. All crew mustered and a security search was carried out throughout the vessel. Port Control informed and a security boat was sent to the location. It was reported that a mobile phone was stolen from the vessel.

5. BOARDED
Date & Time: 22/03/2020 05:57 UTC Location: 62nm WNW of Libreville, Gabon Details: Pirates boarded a container ship underway. Most crew managed to retreat into the citadel. Regional Authorities notified and assistance was dispatched to the ship. When the crew emerged from the citadel seven crew were reported missing.

7. FIRED UPON
Date & Time: 27/03/2020 17:00 UTC
Location: 97nm South of Bonny Island, Nigeria
Details: About ten pirates armed with AK-47 in a skiff doing 21 knots, chased and fired upon a container ship underway. Master raised the alarm, activated distress alert, increased speed and took evasive manoeuvres, resulting in the pirates aborting the attempted attack and moving away. The crew and ship are safe.

This reporting period has largely remained the same as last month, with four incidents of maritime crime reported. These incidents generally use the same modus operandi whereby persons armed with knives or more rarely guns, board a vessel, either underway or at anchor, confront and subdue the crew and then steal ship stores or engine spares before making their escape.

1. BOARDED
Date & Time: 11/03/2020 21:00 UTC
Location: General Santos Harbour Anchorage, Philippines
Details: Duty officer and duty A/B on board an anchored tanker noticed some movements on the forecastle and raised the alarm. Hearing the alerted crew, the persons escaped. Incident reported to Port Control. A search was carried out. The padlock to the Bosun store was reported broken. Nothing reported stolen.

2. BOARDED
Date & Time: 13/03/2020 13:10 UTC
Location: Belawan Anchorage, Indonesia
Details: Duty watchman onboard an anchored container ship noticed an armed robber on the forecastle. He immediately informed the duty officer who sounded the alarm. Hearing the alarm and seeing the alerted crew, the robber escaped by boat. A second robber was spotted escaping via the anchor chain. Crew mustered and a search was carried out. Nothing reported stolen.

3. BOARDED
Date & Time: 15/03/2020 20:30
Location: Singapore Straits
Details: Three robbers armed with crowbar and pipes boarded a bulk carrier underway. The engine crew noticed the robbers and managed to lock them inside the engine room workshop. Alarm raised and crew mustered. Two accomplices in a skiff tried to approach the vessel but were repelled by the crew. Singaporean and Indonesian Authorities notified. Two Indonesian Authority armed guards boarded the vessel and arrested the three robbers.

This reporting period has seen three incident of robbery whilst at anchor in Peru and Brazil.

1. ATTEMPTED BOARDING
Date & Time: 17/03/2020 05:40 UTC
Location: Callao Anchorage, Peru
Details: Duty crew on routine safety rounds onboard an anchored bulk carrier noticed two small boats secured near the bow and three persons climbing the anchor chain. One person was seen waiting in the boat. Alarm raised and all crew moved towards the forecastle. Seeing the alerted crew, the persons retreated and escaped in their boats.

3. BOARDED
Date & Time: 17/03/2020 03:30 UTC
Location: Macapa Anchorage, Brazil
Details: Duty AB on routine rounds onboard an anchored bulk carrier noticed a small boat near the bow and notified the OOW. As he headed forward to check, three robbers intercepted him and took him hostage. The OOW raised the alarm when he noticed some movements near the forecastle and the AB did not respond to his calls on the walkie-talkie. Crew mustered and moved forward. Hearing the alarm and seeing the crew alertness, the robbers released the captured AB and escaped with the AB’s walkie-talkie and ship’s stores.