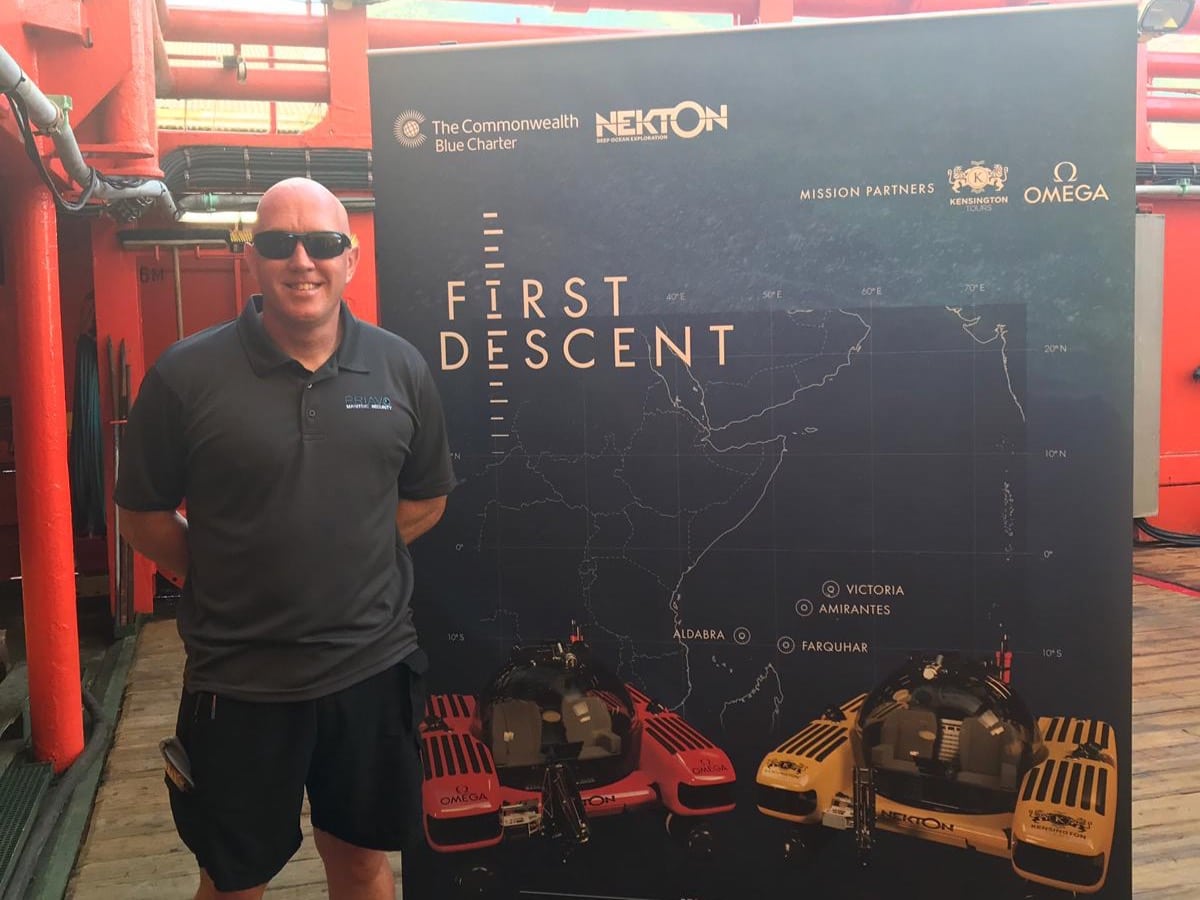 Our Maritime Security Team Leader Shane Loup arrived in the Seychelles after transiting the Ocean Zephyr and crew safely through the High-Risk Area (Transit / Phase 1 is detailed in this blog). This week the scientists started preparing for a series of #FirstDescents using Nekton Foundation mini-submarines for the #deepoceanlive exploration. Shane and his team have been extremely busy preparing the vessel for possible piracy attacks and carrying out maritime security and safety drills in readiness for the first dive.

Additional crew, including the submersible pilots and press, joined the vessel, whilst preparations began for the official Nekton Mission II launch ceremony. A host of important, influential government ministers and VIP’s including the President of the Seychelles, Mr Danny Faure, took a tour of the Ocean Zephyr and inspected the submersibles. Whilst being live streamed by Sky News Mr. Faure spoke passionately about climate change and the dangers to marine life and the future of our planet. The Commonwealth Blue Charter aims to conserve 30% of the worlds Ocean by 2030 and the Seychellois government is leading the way, aiming to hit his target by 2020.

In-line with Maritime SOPS, full Anti-Piracy drills were carried out by TL Shane and the SVPD’s over a number of days, giving everyone on-board the opportunity to understand what to do in the event of a piracy attack or security incident. Muster and citadels were explained and the lockdown process presented and practised.  Many of the team onboard have not been onboard a vessel of this size before. With the shipmasters permission, Shane was allowed to carry out a drill carrying weapons for a bow to stern check of all doors and workspaces. Further briefs for launching the subs were conducted including submersible recovery drills. However, during the week, torrential rain and storms forced a practice launch including chase boat, swimmer and pilot sub recovery to be suspended.

Communication is key to this mission and it was incredibly important that Team Nekton were able to test out the light and sound equipment  to bring live pictures from the deep. Using Bluecomm, a pioneering wireless optical link, LED lights will beam sound and pictures to the satellite uplink from the subs back onto the mothership during the dives. On the 5th March a submersible was launched into the water for the first time with a Sky engineer and sub pilot. They descended 20 metres to run a series of checks. The £2m sub was hoisted over the side of the Ocean Zephyr by an enormous crane and all checks went to plan ready for the Deep Ocean Rescue #FirstDescent.

Following a week of challenges, technical and operational problems, weather issues, extensive testing and preparations – Team Nekton managed a six and a half hour dive to 200 metres and the first live underwater reporting was streamed live to the world on March the 12th. Please see Sky’s Thomas Moores LIVE daily Blog for the detail behind the numerous challenges faced. Live streaming footage of our Security TL, Shane, carrying out mini sub safety checks prior to launch can be seen here.

Now the science truly begins. Scientists will be travelling Aldabra and beyond in search of new species and we are excited to watch what will happen next. Subscribe to our blog or Youtube Channel for updates as we continue providing security over-watch for the scientists, crew, media and mini-subs on for Mission II. Sky News ‘Ocean Rescue’ will be posting live updates and running a Three Part Series from this Monday the 18th March . Stay tuned.

The President of the Seychelles, Mr Danny Faure, addresses the media.

Testing the Bluecomm prior to descent underwater.

Submersible pictured in the water for the first time.