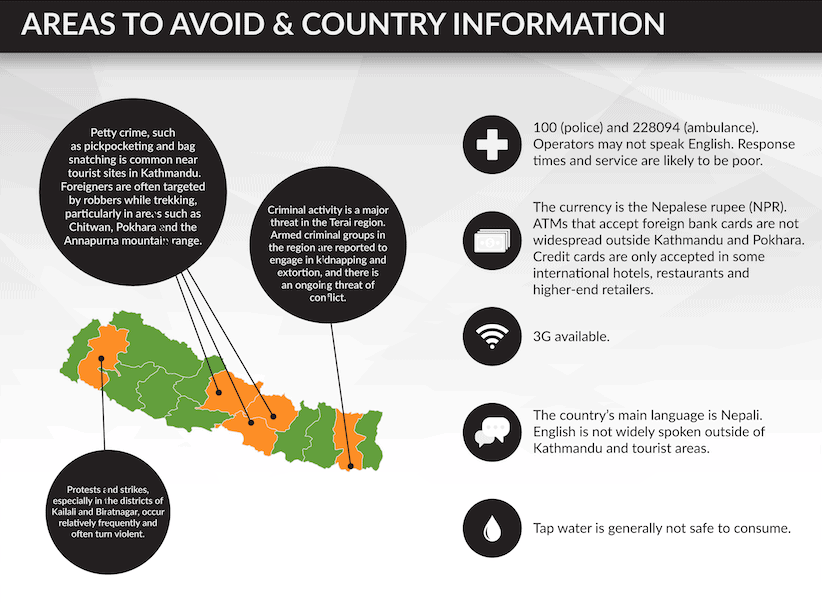 The security and travel risk in Nepal vary according to area and the profile of the traveller. It is possible to visit most parts, but ideally you should be put in contact in advance with a trusted local host to assist you during your stay. Avoid travel without the necessary security precautions to the following areas: Humla; Mugu; Dolpa; Mustang; Manang; Lamjung; Gorkha (including the Manaslu trekking region); Dhading; Rasuwa (which includes the Langtang Valley trekking region); Nuwakot; Sindhupalchok; Kavrepalanchok; Dolakha; Ramechhap; Okhaldhunga; Solukhumbu (including Everest base camp and the Everest regional trekking routes); Sankhuwasabha and Taplejung. This is due to the threat of crime, kidnappings and terrorism.

Petty crime such as pick pocketing and bag snatching is common near tourist sites, airports, hotels and on public transport in Kathmandu. The Chitwan, Pokhara and Annapurna mountain ranges frequently visited by trekkers, have been targeted by robbers.  There have also been reports of sexual assaults in major tourist areas. Terrorist attacks have occurred at crowded locations and on public transport throughout the country. In the Terai region, armed criminal groups have been reported to engage in kidnapping and extortion and there is an ongoing threat of conflict. Several bombs attacks have also been carried out. Medical facilities are poor and serious medical concerns often require international evacuation.

Please be aware this is a brief overview and our advice would be to thoroughly research your destination prior to travel. Our travel risk department can provide country reports, travel risk summaries, advice and support to help mitigate risk further.