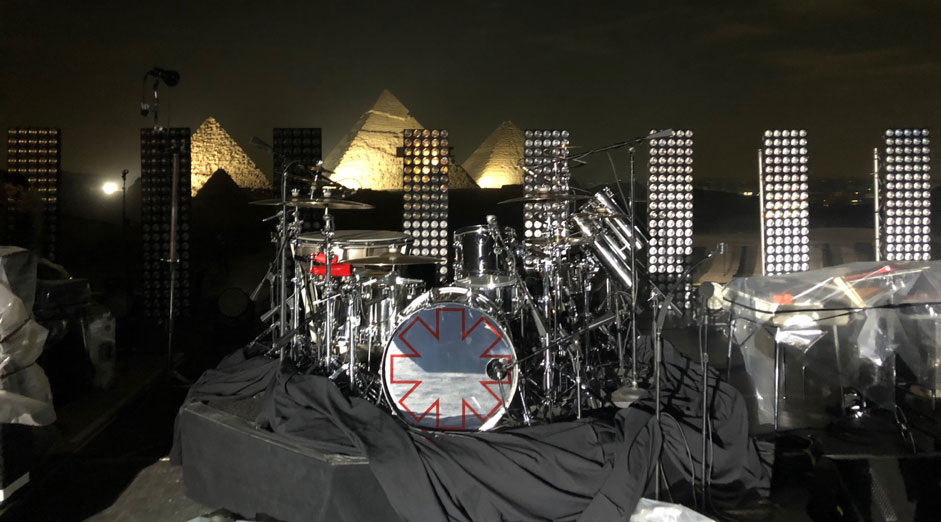 After years of political turmoil Egypt seems to be moving into a fresh chapter. There is a new wave of cultural development and an update to the classic ‘historical’ itinerary embraced by so many visitors to the country over the years.  Home to spectacular sites, including temples and tombs, which reveal thousands of years of history and an ancient but well-advanced civilization. Host to one of the most amazing wonders of the world ‘The Pyramids’ – still shrouded by mystery. I chatted to various Egyptologists on their interpretations of the hieroglyphics and animated carvings embedded in structures – the same question arises from visitors of all nationalities : ‘How was this possible? ’…

The Red Hot Chili Peppers recently marked a significant occasion with a concert on one the world’s most exclusive stages – in front of the Pyramids at Giza. Even the band found it difficult to keep their eyes on the crowd before them. Priavo were engaged to assess the feasibility of the event, assessing the infrastructure surrounding the event from Country Risk, Venue and Music Security, Transport, Vendors and Equipment. With political stability still fragile, terrorism a substantial threat and ‘the experience’ to produce such an event limited due to a huge lull following the revolution – the risk was deemed high. Attacks were carried out in Cairo during our preparation. But with local and expat security operatives in country, ground truth was quickly determined and we deemed it OK to continue, with appropriate security measures in place. Crisis Management at all levels was imperative for the reputation of the band and for Egypt itself. It was crucially important that in the event of an incident any crisis was managed effectively and quickly.

The additional measures required to operate within a high-risk environment increased resources and manpower but, for the band, this was as much about showcasing Egypt as it was about performing in-front of the Pyramids. In addition to the band, Priavo were responsible for guests, family members, entourage, tour management, production and technical teams. We coordinated all security personnel, working closely with the tourist police, Ministry of Antiquities, National Security, US Embassy and local government to mitigate risk and ensure the event ran to a high security standard. All security measures, contingencies and operational planning were put in place. The concert was solely sponsored by Travco who proved extremely capable in carrying out a large-scale event and travel management for the ten thousand spectators travelling from all over the world.

Egypt’s recent history has been eventful.  In 2011 the revolution ended Mubarak’s 30-year regime with the Muslim Brotherhood ascension to power following in 2012 and the election of the Islamist Mohamed Morsi. Tourism, the main economy of Egypt, was heavily affected and still marred by unfortunate events. But there is change. We have operated within Egypt on several occasions this year on behalf of various clients. Business is slowly returning.

Priavo provide security to high profile, corporate, music and event clients looking to explore Egypt safely. We have extensive experience and local support within the country and provide security, medical provisions and vetted transport throughout. Both our UK and Egyptian operatives provide cultural experience at both ends of the spectrum.

Contact us if you require further Travel Risk Management advice or information.